(CNN)The world’s biggest international tobacco company has come under fire for a “hypocritical” campaign encouraging people to give up cigarettes.

Philip Morris — which produces Marlboro cigarettes among other brands — launched it’s “Hold My Light” push in the UK on Monday, urging smokers to switch to vaping or heated tobacco products instead.
But anti-smoking campaigners attacked the company, which also owns e-cigarette brands, saying it is “jumping on the bandwagon” of declining smoking rates in the UK while still selling cigarettes around the world.
“It’s not that the message is the wrong one — it’s that it’s hypocritical for a company that is still promoting smoking in most parts of the world to be saying that it’s turned over a new leaf,” Deborah Arnott, Chief Executive of charity Action on Smoking and Health (ASH), told CNN.

Just one in 10 English people will be smokers by 2023, study says
“They’re basically hanging on the coattails of government anti-smoking regulation that has worked, and they’re trying to get some kind of benefit for them from it,” she added. “They’re looking for a commercial advantage, make no mistake.”
The campaign was launched with a wraparound advert on the front page of British newspaper The Daily Mirror. It encourages people to give up smoking cigarettes with a 30-day challenge, using products such as e-cigarettes to help.
Philip Morris owns e-cigarette and heated tobacco brands including IQOS, Vivid and Nicocig.
View image on Twitter 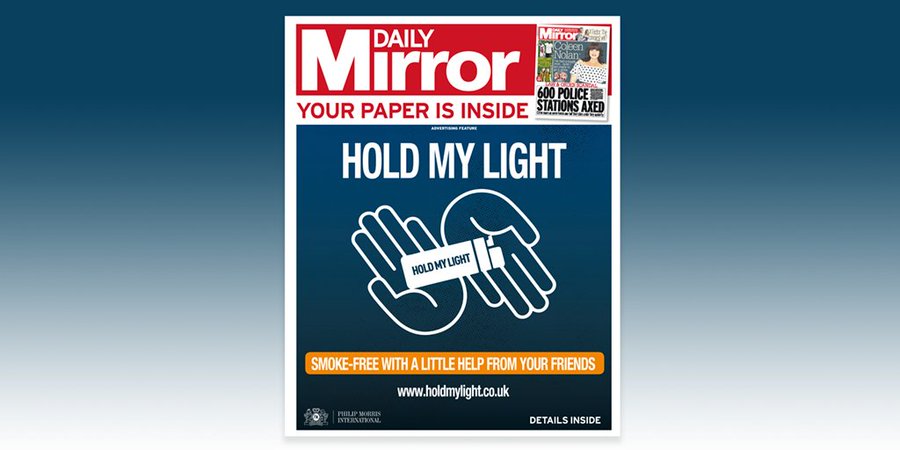 Philip Morris UK@PhilipMorrisUK
Philip Morris Limited launches Hold My Light, a campaign to help smokers give up cigarettes with the support of friends and family. Check it out at http://insid.pm/6012D7l74 #holdmylight #smokefree #insidepmi
“This is a staggering hypocrisy from a tobacco company to promote its own smoking cessation products in the UK while continuing to promote tobacco cigarettes across the world,” George Butterworth, Senior Policy Manager at Cancer Research UK, said in a statement.
“The best way Philip Morris could help people to stop smoking is to stop making cigarettes,” he added.
The company has pivoted towards marketing smoking alternatives in recent years, with the company’s online manifesto saying it is “designing a smoke-free future.”
Mark MacGregor, Corporate Affairs Director UK and Ireland at Philip Morris International, told CNN the company was “surprised” at the criticism of its campaign. MacGregor said: “This campaign is designed to stop people smoking and to give up cigarettes as fast as possible.

Big Tobacco’s court-ordered ads make their debut
“If we simply stopped selling cigarettes tomorrow, literally all that would happen is that smokers would switch to our competitors’ products,” he added.
At the beginning of this year the company launched an advertising campaign in British newspapers encouraging smokers to quit with the tagline: “Our New Year’s Resolution: we’re trying to give up cigarettes,” again citing smoke-free products like e-cigarettes and heated tobacco products as alternatives.
But Shirley Cramer, chief executive of the Royal Society for Public Health, also questioned the company’s motives.
“Their claims of ‘commitment to a smoke-free future’ might be more believable were they not continuing to aggressively advertise Marlboro across the developing world, where tobacco regulation is regrettably far laxer than in the UK,” Cramer said, adding that “this latest messaging from Philip Morris stretches credulity.”

Arnott, from the charity ASH, said the campaign was an attempt to subvert the ban on advertising tobacco products.
Get CNN Health’s weekly newsletter
“Wherever it’s legal Philip Morris is still advertising its Marlboro brand. The fact of the matter is that it can no longer do that in the UK, we’re a dark market where all advertising, promotion and sponsorship is banned, and cigarettes are in plain packs,” she said.
“So instead Philip Morris is promoting the company name which is inextricably linked with Marlboro. That’s why we’re suspicious.”
Smoking rates in the UK have declined rapidly in recent years, with 400,000 kicking the habit in England last year. Public Health England recently predicted that just one in 10 people in England will be smokers by 2023.
Advertising tobacco products has been illegal in the country since 2003, but advertising e-cigarettes is permitted.
Philip Morris International, which sells tobacco products outside the US, has annual profits of over $6 billion and is 108th on the 2018 Fortune 500 list.
Twitter Ads info and privacy